Footballer Arjen Robben of dutch origin has finally retires at 37.The left back player has had a glittering career .

After suffering from injuries since joining FC Groningen ,has  decided to call it a quit.He break the news some few hours ago in his Instagram account with this heartfelt note!

”Dear football friends,i have decided to quit my active football career.A very difficult choice to make.I want to thank everyone for all the heartwarming support,greeting,Argen”.

With the national team scene,he was so intrumental in their world cup outing in 2010 that saw them played their first ever world cup final losing to spain.He also won 96 caps for the dutch. 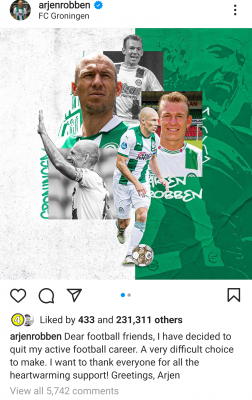 Our Playlist of the Week